The summer  I was six, my cousin of the same age was visiting our spinster great-aunt and bachelor uncle who lived up the street. Uncle called one evening. Cousin was being a major pain. It was a weeknight, and the only amusement our miniscule town afforded, a roller skating rink, was open only on weekends. Great-aunt and uncle weren’t accustomed to dealing with children of the painful variety, so he did what he often did when desperate. He appealed to my mother: You’ve got to do something.

A veteran of dealing with a juvenile pain, she proposed the perfect solution. They loaded both of us into the car and took us fifteen miles to the drive-in movie.

A synopsis of the novel from which the movie was adapted appears on Wikipedia: 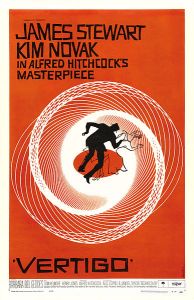 A prosperous shipbuilder hires a former detective who suffers from vertigo to tail his wife Madeleine who is acting strangely. The detective falls in love with the shipbuilder’s wife but is unable to stop her committing suicide by jumping from a tower. Haunted by her death, he sees a woman who bears a strong resemblance to the dead woman, however, his attempts to get closer to this doppelgänger ultimately result in tragedy.

In these enlightened times, many, if not most, parents would be horrified at anyone’s allowing a first-grader to see such a nightmare-inducing movie. I, however, spent every afternoon glued to the Afternoon Movie. I guess my mother assumed that if I could handle Don Ameche trying to get rid of his wife, Claudette Colbert, by drugging her hot chocolate and then piping in repeated suggestions that she jump off her bedroom balcony, Hitchcock wouldn’t upset me. 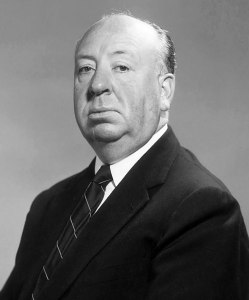 And I’ve always been grateful to her, because that night at the drive-in, I fell in love. I watched Hitchcock’s television programs and all the movies I could manage. They were wonderful, and if they starred Cary Grant–Francine Paino wrote about one of those, North by Northwest, last week–that was icing on the cake.

Now Netflix, Prime, Roku, and other streaming services have allowed me to watch many of them again.

But this post isn’t a celebration of Hitchcock. It’s about two stories adapted for his television show. Watching them as an adult, I saw something I hadn’t seen years (and years) ago. I enjoyed both, but one had something extra.

The first is “The Second Wife,” in which a mail-order bride comes to believe that her husband plans to kill her. At the outset, he seems insensitive, unconcerned about her needs; when she says the laundry room in the basement is uncomfortably cold, he complains about the cost of installing a heater. She also hears stories: he took his first wife to visit her people at Christmas and she died and was buried there–or that’s what he claims.

Gossip fuels the second wife’s fears, and when the husband announces plans to take her home for Christmas, she acquires a gun. Before they leave, however, he insists she go down to the basement. She takes the gun and descends the stairs. He’ll follow in a moment.

The viewer feels her fear: The husband will kill the second wife, as he killed the first.

But there’s a literary catch. In a letter, Anton Chekhov stated one of his principles for writing fiction: “One must never place a loaded rifle on the stage if it isn’t going to go off. It’s wrong to make promises you don’t mean to keep.”

The wife has a gun. And this is Hitchcock; he keeps his promises.

The wife shoots and kills her husband, then realizes he’d only wanted to show her her Christmas present–the heating system he’d had installed in the laundry room.

A tragic ending, but satisfying in its irony.

The second story, “Night of the Owl,” however, has something extra, something unexpected.

A couple have reared an adopted daughter, now a teenager, a bright student, a well-adjusted, happy girl. But the parents have carefully guarded a secret: the girl’s father murdered her mother, then killed himself in prison. When a prison chaplain and his accomplice appear and blackmail the couple, then come back for more, the father considers his options: murder the blackmailer, or tell his daughter about her past. Both are unthinkable. Then one of the blackmailers is murdered. Evidence points to the father.

How can the plot be resolved? Did the father commit murder? He escapes being charged but can’t escape telling his daughter about her birth parents.

In “The Second Wife,” the resolution is either/or, and the viewer can almost certainly predict which it will be.

But the ending of “The Night of the Owl” isn’t predictable. Will the girl become hysterical? Fall into depression? Reject her adoptive parents? Run away? Harm herself?

Told the truth about the murder/suicide in her background, she expresses empathy. How unhappy her parents must have been, she says–what sad lives they must have lived.

I didn’t see that coming. A Hitchcock program with a happy ending. And an exceptional character.

Critics (professional and amateur) point to problems with both  programs. Fair enough. I didn’t watch for flaws. In fact, I didn’t watch for anything but the pleasure of seeing programs I’d first watched as a child. I just happened to see something more.

Robert Bloch wrote the teleplay of “The Second Wife” based on a story by Richard Deming. It aired on The Alfred Hitchcock Hour on October 4, 1962.

Richard Fielder wrote the teleplay of “The Night of the Owl” based on a novel by Paul Winterton. It aired on The Alfred Hitchcock Hour on April 26, 1965.

Joe E. Brown appears as Osgood Fielding III in Some Like It Hot. He has the best line in one of the best, and funniest, movies ever made.

Research turned up this biographical item: “An ardent opponent of the Nazi regime, in 1939 Brown testified before the House Immigration Committee in support of a bill that would allow 20,000 German-Jewish refugee children into the United States. He would later adopt two German-Jewish refugee girls himself, naming them Mary Katherine Ann (born 1930) and Kathryn Francis (born 1934).”

Images are taken from Wikipedia. Both are in the public domain.

My hubby and I make it our mission to see all of the films nominated for the Academy Awards’ most coveted prize—the Oscar for Best Picture. This year was no exception. We saw Ford V Ferrari, The Irishman, JoJo Rabbit, well, let’s just we say all of them. So on February 9 of 2020, we sat down with friends, champagne glasses in hand, and watched the Academy Awards show. I agreed with most of the winners. Renee Zellweger knocked it out of the park as Judy Garland. Brad Pitt was awesome in Once Upon a Time in Hollywood. For damn sure, 1917 deserved the award for Best Cinematography. But when Parasite was announced as 2019’s best film, I didn’t get it. Then again, I didn’t get the movie either. The poor living off the rich. The rich living off the poor. Who was the bad guy? Which was the parasite? 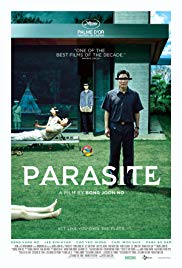 So, I got out my cell phone, went to Dictionary.Com, and looked up the word. The first definition that came up was the one that stuck with me. It read, “an organism that lives on or in an organism of another species, known as the host, from the body of which it obtains nutriment.” I thought of the mosquito who bites humans and sucks their blood. They feel no remorse, no guilt. It’s what they do to survive. How exactly did this definition apply to the movie Parasite?

Then my book club (Remember them? I bragged on them several blogs ago.) had as its monthly selection Hyeonseo Lee’s book titled The Girl With Seven Names. It was the author’s true story of escaping from North Korea, via China, and finally arriving in South Korea. As she made this dangerous journey, she used seven different names to remain off the authorities’ radar. 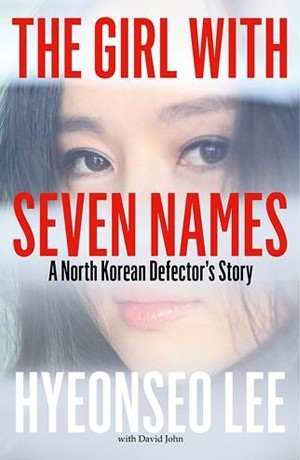 Lee’s descriptions of growing up in North Korea were very unsettling. There are over fifty layers of societal classes in the country, each with their own set of privileges and restrictions. The only constant among all of these “castes” is that the supreme ruler (first Kim Jong-il and now Kim Jong-un) is to be worshipped and glorified. (It is believed that Kim Jong-un was born in a lowly stable and that a bright, huge star announced his birth. Seriously?) As for the other laws, not so much. The main rule is Kim Jong-un first, and, as long as you’re not stupid, you are allowed to do pretty much whatever you have to do to survive. Bribery of officials to look the other way is the norm. (Hey, they have to make a living too.) This is how people learn to deal with famine, pestilence, and unemployment. There is no guilt in doing what one must do to survive.

Further, the society has no guilt in doing what it must do to survive. Bingo. I finally figured out what the movie Parasite was all about. A different culture. A different value system. A guilt-less survival instinct.

Books teach us things. Oh, yes, books entertain, but they also take us into worlds beyond our own experiences, histories we never learned, and points of view we never considered. Had I not read Hyeonseo Lee’s book, I would not have understood the movie, or the culture. More to the point, I understand that America’s culture has different norms, different thought processes, and a different hierarchy of what’s acceptable. We may think that the characters in Parasite and Lee’s book should feel remorse for how they live. But for them, it’s what they must do. And if their culture is all in on this “no guilt” survival, doesn’t that reveal something of their leadership?

For me, The Girl with Seven Names was a real eye opener. Books teach us about folks who are not of our national or personal culture. We can learn why they live how they live. Maybe, even, we can learn how to live with them.

K.P. Gresham is the author of the PASTOR MATT HAYDEN MYSTERY SERIES and THREE DAYS AT WRIGLEY FIELD. Read more about her here.