Last week, Fran Paino described how family obligations can keep a writer from writing. My post describes an experience that happened several years ago. It’s similar to Fran’s–and at the same time, very different.

In her book The Artist’s Way, Julia Cameron  introduces the  Artist’s Date–a weekly solo “adventure to feed the soul and allow for continued creativity.” In other words, artists–including writers–need to play. At a writers’ retreat in Alpine, Texas, author Karleen Koen led students through a whole week of play. Returning home, I vowed to incorporate the Artist’s Date into my writing life. 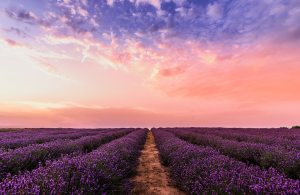 It wouldn’t be difficult. Central Texas affords plenty of places to play: Longhorn Cavern State Park at Burnet, lavender fieldsin the Hill Country,  the Elizabet Ney Museum, the Umlauf Sculpture Garden, and the Japanese Garden at Zilker Park, in Austin are only a few.

But having just had a week-long Artist’s Date, I chose to start with a Writing Date instead.

Here’s how it went:

I woke at a reasonable hour and dressed to leave for my coffee shop/office.

Downstairs, doling out cat food, I realized I’d seen no cats. That was troubling. William usually slept late, but Ernest was an early riser. He often climbed onto my pillow and swatted my face, making me an early riser, too.

So I called, ran upstairs, searched, called some more. William, draped across his pagoda, opened his eyes and blinked but offered no help.

I ran downstairs, called, searched, dropped to my knees and peered under furniture. I ran back upstairs. Etc.

Finally dropping in the right place, I found Ernest under the bed, sitting in that compact way cats have, with all his feet nearly tucked in. His eyes were not warm and welcoming. When I tried to pull him out, he wriggled loose and ran into the hall and thence into the guest room and under that bed–a sure sign of a sick cat.

He reminded me of a get-well card I once sent to a great-aunt. On the front was a drawing of an orange tabby with a bored, Morris-like expression on his face, and the words, “Feeling poorly? Do as I do.” Inside it said, “Crawl under the porch.”

Ernest didn’t have a porch so he crawled under the next best thing.

I put batteries in the flashlight and girded my loins. Negotiating the guest room is not for the faint of heart. The bed is built low to the ground, and there’s stuff in there. 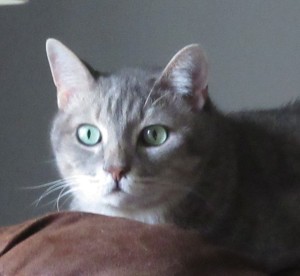 Again on my hands and knees, and practically standing on my head, I located Ernest lying in a corner near the wall. I stretched out on the carpet, reached as far as possible, and scratched his ears. He didn’t protest, but the look in his big green eyes said I’d better not make any sudden moves.

Ernest is mostly muscle. Talons tip his twenty toes. He has a mouthful of teeth.

Like Barry Goldwater, he believes extremism in the defense of liberty is no vice.

I believe in keeping my all blood on the inside of my skin.

But I also believe extremism in the pursuit of getting sick children to the doctor is a necessary evil.

And I had a pretty good idea of what had occurred.

Ernest suffers from what might be termed a sluggish constitution, aggravated by his habit of swallowing objects that aren’t food, like bits of string, thread, ribbon. We don’t leave it lying around, but he finds it anyway. The vet says cats are drawn to elongated things. Something about mouse tails, I guess.

The first time he hid under the bed, two years before, I had to authorize X-rays, ultrasound, and a simple procedure he really, really didn’t like. We refer to it as the $400 enema. Swallowing string can cause serious problems for a cat. So I had to get him some help before a minor problem became major.

I found his jingly collar, the one he refused to wear, lay down again, and jingled at him. He gnawed on the collar and purred. Then he flopped over onto his back so I could rub his belly.

After a couple of minutes the dust bunnies keeping Ernest company attacked. I began sneeze. Ernest doesn’t care for sneezing–it scares him–so I went back downstairs and sneezed till my throat was raw. Then I coughed. And coughed. And coughed. I couldn’t find cough drops or unexpired cough medicine, so I poured out the dregs of some extremely aged Jim Beam (my mother had bought it to baptize her Christmas applesauce cakes thirty years before), and added the only sweetener we had, David’s hummingbird sugar.

While I was resting, sipping medicine from a spoon, Ernest waltzed down the stairs. He sashayed past me and headed to the kitchen. I heard crunching. Then he sashayed back.

Sneak that I am, I lured him into my lap, applied a full nelson, stuffed him into the waiting crate, lugged him to the car, and hauled him to the vet. He protested. When two big dogs in the waiting room charged up to his crate to pant hello, he shut up.

First stop was the scale: seventeen pounds. No surprise. My back muscles were already crying for the massage therapist. 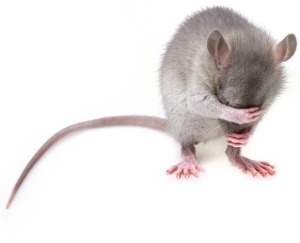 Then the vet poked and prodded and determined Ernest had indeed ingested something he shouldn’t have, probably something the shape of a mouse tail.

I had three choices: take him home, give him meds, and watch him for twenty-four hours; leave him there for meds and the procedure he really, really didn’t like and pick him up at five p.m.; or be referred elsewhere for X-rays, because our vet’s office was in process of being moved down the street and his X-ray machine was in pieces.

He said choice #1 would have been fine for his cat, but I chose #2. If I left Ernest there, I knew he would come home unclogged. If I took him home, he would run under the bed and I’d never see him again. I hated to leave him, but it was, after all, his fault.

Anyway, at five p.m., David and I retrieved Ernest and a tube of Laxatone for maintenance. Ernest recovered and, after a time, forgave me. Everything returned to normal, till the next time he ate thread.

And that is the story of what I did the day I didn’t write.

I’m still trying to decide if it qualifies as an Artist’s Date.

Note–and this is how I understood the veterinarian’s explanation, not to be taken as medical advice: Some foreign objects will biodegrade in a cat’s GI tract. String, thread, ribbon, and things of that type, even if they’re biodegradable, sometimes catch in the back of a cat’s mouth when he swallows. As food travels through the GI tract, the thread straightens out and becomes taut and can cut the cat’s intestines, necessitating surgery (if the problem is diagnosed in time). Laxatives can worsen the condition. A visit to a veterinarian is desirable.

M. K. Waller blogs at Telling the Truth, Mainly. Visit her on Facebook at https://www.facebook.com/kathy.waller68/