“Almustafa, the chosen and the beloved, who was a dawn unto his own day, had waited twelve years in the city of Orphalese for his ship that was to return and bear him back to the isle of his birth.

And in the twelfth year, on the seventh day of Ielool, the month of reaping, he climbed the hill without the city walls and looked seaward; and he beheld his ship coming with the mist. . .
. . .
“And he said to himself:
Shall the day of parting be the day of gathering?
And shall it be said that my eve was in truth my dawn? . . .

Born in Lebanon in 1883, Kahlil Gibran was the son of an erratic and abusive alcoholic father who forced Kahlil’s mother to flee with her four children to the United States; Kahlil was 12 years old.  Although they arrived in New York initially, they quickly relocated to Boston’s Southside, settling within a larger immigrant community.

Gibran’s formal education was interrupted fleeing Lebanon, again through relocation to Boston.  The small family faced obstacles of language and culture, yet, despite this, the mother opened a small store that allowed some income.  During Kahlil’s late teens, a sister and both brothers died from tuberculosis; shortly after, Gibran’s mother died from cancer.  As the remaining guardian of his youngest sister, Gibran continued working his mother’s store while pursuing painting and writing.

Prior to his mother’s death, Kahlil also began writing and translating various articles for Boston’s Arabic /Lebanese newspapers. Through the translation work, he established contacts within the Boston artistic community giving Kahlil the encouragement and patronage he desperately needed.  His mother, however, questioning his friendships with the Art Nouveau/Romantic community, sent him back to Lebanon for more education.  He found his father the same aggressive, angry alcoholic Kahlil had fled years before, and he quickly returned to Boston and his mother.

Gibran’s early attempts at art, similar in style to the Romantic William Blake, failed to find an audience, but his writings, generated a respectable following. This was still not enough to support his sister or himself, particularly after his mother’s passing.  It was during this time that Gibran established a pattern of behavior he followed for the rest of his life—first, seeking acceptance within a supportive artistic community and, second, befriending and securing patronage of wealthy older women.

Boston’s literary critics found Kahlil’s grammar stilted and his spiritual style hard to understand.  Acceptance in the larger literary circles remained out of reach but several years passed before Gibran, upon the advice of friends, relocated to New York.  Once there, Gibran’s prose poems and parable style writings established his reputation as a respected writer.

In 1931, Gibran died from causes related to alcoholism and cirrhosis of the liver. He was 48 years of age. His body was returned to Lebanon, where he was buried.

In these troubling times of COVID—confusion and radical change, Gibran’s gentle messages pose as a reminder of the importance of caring for your neighbor, giving without expectation of return, knowing yourself, and loving without judgment.  You do not have look hard to find the love in Gibran’s message, and I, for one, am in favor of more of love everywhere. 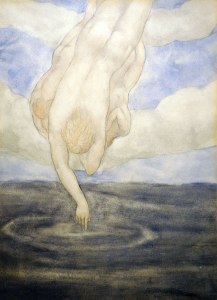 …When love beckons you, follow him,
Through his ways are hard and steep.
And when his wings enfold you yield to him,
Though his voice may shatter your dreams as the north
Wind lays waste the garden.

. . .Love gives naught but itself and takes naught but from itself.
Love possesses not nor would it be possessed;
For love is sufficient unto love.
. . .
When you love you should not say, “God is in my heart,”
but rather, “I am in the heart of God.”
And think not you can direct the course of love, for love,
If it finds you worthy, directs your course.”

. . .Your children are not your children.
They are the sons and daughters of Life’s longing for itself.
They come through you but not from you,
And though they are with you yet they belong not to you. . .
…
You are the bows from which your children as living
Arrows are sent forth.
The archer sees the mark upon the path of the infinite,
and He bends you with his might that His arrows may go swift and far. . .

Then said a rich man, Speak to us of Giving.
And he answered:
You give but little when you give of your possessions.
It is when you give of yourself that you truly give.
For what are your possessions but things you keep and guard
for fear you may need them tomorrow? . . .
. . .
It is well to give when asked, but it is better to give unasked,
through understanding;
And to the open-handed the search for one who shall
receive is joy greater than giving.
And is there aught you would withhold?
All you have shall some day be given;
Therefore give now, that the season of giving may be yours and not your inheritors’. . .

Images via Wikipedia. All are in the public domain. For more information, click on each image.

A former paralegal, Renee Kimball has a master’s degree in criminal justice. Among her interests are reading and writing. She is an active Animal Advocate and fosters both dogs and cats and works with various organizations to find them forever homes.

Authors, how do you name your characters?

The average person only has to come up with names when they are naming their children. As anyone who has enjoyed the privilege of naming children knows, this task can be fraught with difficulties. Everyone has different criteria for what they consider important: family connections, name meaning, how well it fits with other family names, how well it sounds when yelled, how common or uncommon the first name is, how many other people have the exact same first and last name combination. Some names come easily months before they are needed and others aren’t finalized until someone threatens not to let a parent leave the hospital until a form is filled out.

Naming a character can be like naming a child. While my characters don’t have a flesh and blood life to ruin if I name them poorly, I do have readers’ responses to worry about. Will the name fit the character in a way that enhances the story? Will readers hate it? Will an unknown person somewhere in the world sue if the character has their name?

Some authors have a gift for inventive naming. J. K. Rowling, for instance, takes the prize for the most-creative names, as far as I’m concerned, with Ian Fleming as a close second. For a great review of some fabulous character names, see this blog post by John Floyd, who provides lists of character names placed in categories such as light-hearted, strong, mysterious, and evil.

Lacking a flair for naming, I resort to a baby name book and Google.

In my first book, a suspense novel called All in Her Head, the main character is named Martha because of the biblical story of Martha and her sister Mary. In that story, Martha is the worrier who doesn’t sit down and relax, the one trying to get everything done for her guests. My character in the book suffers from crippling anxiety. She’s the queen of worriers facing anxiety-inducing life changes: she recently relocated to a new city to start a new job and hasn’t made any friends yet. On top of that, I made her a witness to attempted murder. The poor girl has a lot to handle, but, in spite of her mental health issues, she fights to keep her focus in the face of murderous assaults, explosions, attacks, and car accidents.

In my second novel, a medical mystery entitled For the Children’s Sake, the victim and the main protagonist are twin brothers name Ingall and Ignatius. I chose the names by their meanings. The character of Ingall is a murdered, saintly Catholic priest, while his twin Ignatius is a red-headed Chemist with a temper, who fights to solve his brother’s murder. Ignatius means fiery, ardent, which fit the character. The name Ingall I chose for alliteration with Ignatius and because it was a variant spelling of Angell, meaning angel or messenger of God, which felt appropriate for a saintly clergyman.

Sometimes, I can’t come up with a first and last name combination that I like so I delay by only calling the character by one name. In my Bad Vibes Removal Services paranormal mystery series, the main character is a history graduate student who sees ghosts and likes to try out clothing and hairdo’s from ancient civilizations. Her first name, Lea, came to me easily. However, she didn’t have a last name through multiple short stories until I finally tagged her with Saroyan.

Lea’s detective/ inventor boss was named only as Mr. Montgomery in several short stories and through the novels. I finally gave him a first name in a bonus short story at the end of the second novel, Degrees of Deceit. Since Montgomery is described as six feet tall, pushing 300 pounds, and is a force to be reckoned with who seeks justice for others, I named him Orestes. Orestes means “mountain man,” which fit my mountain of a character, and the original Greek Orestes sought justice for his father’s murder. This delaying in naming a character may be the equivalent of not officially naming your kid until he’s four years old, but at least I got there in the end.

N. M. Cedeño is a short story writer and novelist living in Texas. She is currently working on a paranormal mystery series called Bad Vibes Removal Services. The second novel in the series, entitled Degrees of Deceit, came out in August 2019.  Ms. Cedeño is active in Sisters in Crime- Heart of Texas Chapter.