Sometimes, as an author I am asked where I get ideas for my short stories. I get my inspiration from books and articles I read, places I visit, and events in the world around me. The six new short stories in Arson Vibes and Other Tales, which came out recently, can all be traced to these sources. 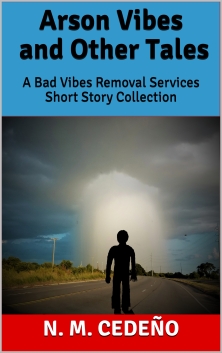 The story Victorian Vibes features my characters Lea and Kamika finding a gory, sealed room inside of a house under renovation. This story, which opens the collection, was inspired by a driving tour of Victoria, Texas, an old Spanish colonial town south of San Antonio. Victoria is home to more than 114 historic properties all listed on the National Register of Historic Places. These buildings are mostly restored architectural gems. A driving tour through town will take visitors past 80 of them. Creating a similar house with a haunted past and ‘bad vibes’ for my characters to explore wasn’t a difficult task.

Feline Vibes, the second story in the collection, features Lea and Patrick trying to solve a murder in which the police have made no progress. The story was inspired by the many scattered properties I’ve driven past in the Texas Hill Country on the way to Fredericksburg and Enchanted Rock State Park. The natural beauty of the area draws hikers and campers and people looking to escape the fast-paced life of city living. But the isolating hills, cactus, and long distances between neighbors also make a wonderful backdrop for murder.

Texas Frontier Vibes was partially inspired by reading the book Empire of the Summer Moon: Quanah Parker and the Rise and Fall of the Comanches, the Most Powerful Indian Tribe in American History by S. C. Gwynne. The long and bloody battle between the Comanches and every wave of settlers that tried to take their land is fertile ground for ghost stories. In the story, a collection of arrow heads is bound to the ghost of the person who died being shot with the arrows. While the injuries sustained by the character in the story are drawn directly from history, the idea that the arrow heads could be haunted was inspired by my father’s inheritance of a collection of points, axes, scrapers, and other stone tools from his deceased brother who had been a lifelong collector of these items.

Space Shuttle Vibes owes its existence to my memory of the disaster involving the Space Shuttle Columbia when it came apart catastrophically over Texas in 2003. That accident led to the largest search and recovery effort ever carried out in the United States and is well-detailed and explained in a book that I read entitled Bringing Columbia Home by Michael Leinbach and Jonathan Ward. Sixty percent of Columbia remains lost in the swamps and thickets of East Texas. This fact inspired my tale of a man who dedicates his retirement and apparently part of his afterlife to finding and returning the pieces.

Museum Vibes, the story of a haunted living history pioneer farm, was inspired partially by my interest in all things historical, from gold-rushes and frontier life to the tuberculosis epidemic that plagued the world in the 19th and early 20th centuries. It’s also based on my many visits to pioneer farms with living history exhibits in the Dallas area and in the Austin area. What ghosts wouldn’t want to stay in a place that looked and felt like the time period in which they lived?

The final story in the collection, Arson Vibes, was inspired by a terrible fire that engulfed a lovely wood-frame church in a small community in Texas a few years ago. Texas has a number of famous, painted churches built by European immigrants in the late 1800 and early 1900s. The Painted Churches Tour in Texas is a great way to see a handful of them. While the fire in the real church was accidental, the one in my story is, of course, an act of arson which needs my investigative crew to solve it.  And old churches, with their adjacent graveyards, should come with a ghost or two, shouldn’t they?

These new stories in the collection Arson Vibes and Other Tales are on sale this week, May 4 to 11, 2020. At the moment the stories are only available on Amazon, later in the summer they will be available from other retailers. I would have the stories available everywhere, but the coronavirus and its attendant issues have put a crimp in my schedule at the moment.

N. M. Cedeño is a short story writer and novelist living in Texas. She is currently working on a series called Bad Vibes Removal Services. The second novel in the series, entitled Degrees of Deceit, came out in August 2019.  Ms. Cedeño is active in Sisters in Crime- Heart of Texas Chapter.