So you start writing your post about the incomparable Josephine Tey’s mystery novels two weeks before it’s due but don’t finish, and then you forget, and a colleague reminds you, but the piece refuses to come together, and the day it’s due it’s still an embarrassment, and the next day it’s not much better, and you decide, Oh heck, at this point what’s one more day? and you go to bed,

and in the middle of the night you wake to find twenty pounds of cat using you as a mattress, and you know you might as well surrender, because getting him off is like moving Jello with your bare hands,

so you lie there staring at what would be the ceiling if you could see it, and you think, Macbeth doth murder sleep…. Macbeth shall sleep no more,

and then you think about Louisa May Alcott writing, She is too fond of books, and it has turned her brain,

and you realize your own brain has not only turned, but has possibly come unhinged.

And you can’t get back to sleep, so you lie there thinking, Books, books, books. Strings and strings of words, words, words. Why do we write them, why do we read them? What are they all for?

And you remember when you were two years old, and you parroted,

The owl and the pussycat went to sea in a beautiful pea green boat,

because happiness was rhythm and rime.

And when you were five and your playmate didn’t want to hear you read “Angus and the Cat,” and you made her sit still and listen anyway.

And when you were fourteen and so happy all you could think was, O world, I cannot hold thee close enough!, and you didn’t know who wrote it but you remembered the line from a Kathy Martin book you got for Christmas when you were ten.

And when you were tramping along down by the river and a narrow fellow in the grass slithered by too close, and you felt a tighter breathing, and zero at the bone.

I’ll tell you how the sun rose,
A ribbon at a time,
The steeples swam in Amethyst
The news, like Squirrels, ran
The Hills untied their Bonnets

And when you saw cruelty and injustice, and you remembered, Perfect love casts out fear, and knew fear rather than hate is the source of inhumanity, and love, the cure.

And when your father died unexpectedly, and you foresaw new responsibilities, and you remembered,

We never know how high we are
Till we are called to rise.

And when your mother died, and you thought,

Oh, if instead she’d left to me
The thing she took into the grave!-
That courage like a rock, which she
Has no more need of, and I have. 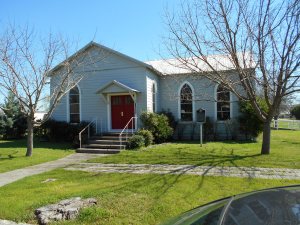 And at church the day after your father’s funeral, when your cousins, who were officially middle-aged and should have known how to behave, sat on the front row and dropped a hymnbook, and something stuck you in the side and you realized that when you mended a seam in your dress that morning you left the needle just hanging there and you were in danger of being punctured at every move, and somehow everything the minister said struck you as funny, and the whole family chose to displace stress by laughing throughout the service, and you were grateful for Mark Twain’s observations that

Laughter which cannot be suppressed is catching. Sooner or later it washes away our defences, and undermines our dignity, and we join in it … we have to join in, there is no help for it,

Against the assault of Laughter nothing can stand.

Laughter which cannot be suppressed is catching. Sooner or later it washes away our defences, and undermines our dignity, and we join in it … we have to join in, there is no help for it,

Against the assault of Laughter nothing can stand.

And when you fell in love and married and said with the poet, My beloved is mine and I am his.

And when, before you walked down the aisle, you handed a bridesmaid a slip of paper on which you’d written, Fourscooooorrrrrrre…, so that while you said, “I do,” she would be thinking of Mayor Shinn’s repeated attempts to recite the Gettysburg Address at River City’s July 4th celebration, and would be trying so hard not to laugh that she would forget to cry.

And when your friend died before you were ready and left an unimaginable void, and life was unfair, and you remembered that nine-year-old Leslie fell and died trying to reach the imaginary kingdom of Terabithia, and left Jess to grieve but to also to pass on the love she’d shown him.

And when the doctor said you have an illness and the outlook isn’t good, and you thought of Dr. Bernie Siegal’s writing, Do not accept that you must die in three weeks or six months because someone’s statistics say you will… Individuals are not statistics, but you also remembered what Hamlet says to Horatio just before his duel with Laertes,

And by the time you’ve thought all that, you’ve come back to what you knew all along, that books exist for pleasure, for joy, for consolation and comfort, for courage, for showing us that others have been here before, have seen what we see, felt what we feel, shared needs and wants and dreams we think belong only to us, that

everything the earth is full of… everything on it that’s ours for a wink and it’s gone, and what we are on it, the—light we bring to it and leave behind in—words, why, you can see five thousand years back in a light of words, everything we feel, think, know—and share, in words, so not a soul is in darkness, or done with, even in the grave.

And about the time you have settled the question to your satisfaction, the twenty pounds of Jello slides off, and you turn over, and he stretches out and leans so firmly against your back that you end up wedged between him and your husband, who is now clinging to the edge of  the bed, as sound asleep as the Jello is, and as you’re considering your options, you think, 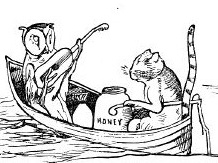 The Owl and the Pussy-cat went to sea
In a beautiful pea-green boat,
They took some honey, and plenty of money,
Wrapped up in a five-pound note.
The Owl looked up to the stars above,
And sang to a small guitar…

and by the time the Pussycat and the Elegant Fowl have been married by the Turkey who lives on the hill, and have eaten their wedding breakfast with a runcible spoon, and are dancing by the light of the moon, the moon, you’ve decided that a turned brain has its advantages, and that re-hinging will never be an option.

Kathy Waller writes crime fiction, literary fiction, humor, memoir, and whatever else comes to mind. Her short stories appear in the Silver Falchion Award winner Murder on Wheels, Austin Mystery Writers’ first crime fiction anthology, and in their second, Lone Star Lawless, as well as in other print publications and online. Her novella STABBED, co-authored with Manning Wolfe, was released in October 2019. She blogs at Telling the Truth–Mainly.

Memories of growing up in a small town on the San Marcos River in Central Texas, and life in a large extended family, inspire much of her work. She now lives in Austin with two cats and one husband.

One thought on “A Mind Unhinged”