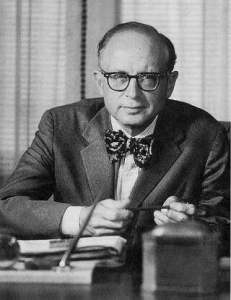 There are many people who have never heard of Daniel J. Boorstin. You may not know of him or his lifetime of work. Boorstin is one of a group of modern historians who rose to prominence during the 1950s.

Boorstin was born in 1914 and died in 2004, at the age of 89. He was a man of many talents, but in terms of authorship and approach he was truly unique. To study all his work would take a lifetime.

Boorstin’s gift was his laser-like insight and unrivaled ability of connectedness. He was adept at evaluating trends and society, as well as history, and combining both into highly readable chronologies. His writing details historical events, social change, progress, and scholarly viewpoints including the history of America and the world. To say that Boorstin was the consummate researcher is an understatement.

Not only was Boorstin adept at interconnecting facts, people, places, inventions, and abstract concepts into a smooth and interconnected whole, no one that I am aware of has written with the same clarity or ability as a historian – Boorstin has no equal. He was also such a prolific writer; a published annotated bibliography was produced comprised solely of his work in 2000.

Daniel J. Boorstin is what is called “a place keeper.” He is the type of historical and social writer who sees the essential in the mundane, marks it, explains it, and knows the effect the event had at its inception as well as the impact it could or would have in the future. Boorstin was one of the first to literally name certain social conditions. He was the first to coin, “image”, the “non-event” and the “celebrity”, all concepts either invented, or first dissected, by him.” (Hodgson, 2004).

But who was this man? 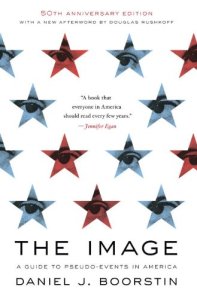 Boorstin was born in 1914 in Atlanta, Georgia, the son of Russian Jewish Immigrants. His father was an attorney who represented Leo Frank, and despite being found innocent of the rape and murder of a young girl, Frank was later lynched by The Ku Klux Klan. Anti-Semitism forced the Boorstin family to relocate to Oklahoma.

After completing his early schooling, Boorstin went first to Harvard Law, graduated, then studied at Balliol College, Oxford as a Rhodes Scholar. During 1938, he joined the Communist Party for one year. He dropped his affiliation when Russia and Germany invaded Poland. He never returned to the Communist Party, and fully denounced it when questioned in later years.

He received his doctorate at Yale and was hired as a professor at Swarthmore College in 1942. Later, Boorstin became a professor at the University of Chicago, holding that position for twenty-five years. He later attained the position of “Pitt Professor of American History and Institutions,” at the University of Cambridge. In 1974, he became the Librarian of Congress upon the nomination of then President Gerald Ford, and retained that position for a full twelve years.

He married Ruth Frankel, in 1941. Their marriage was a solid and lasted the rest of their lives. Ruth was also Boorstin’s editor. “Without her,” he was quoted as saying, “I think my works would have been twice as long and half as readable.”

Boorstin is known best for the trilogy, The Americans, however a second well-known trilogy spanned an all-encompassing study of man and the world in which he lives. That trilogy included  The Discoverers: A History of Man’s Search to Know His World and Himself, The Creators: A History of Heroes of the Imagination and The Seekers: The Story of Man’s Continuing Quest to Understand His World Knowledge Trilogy.

These works are maps from where man began, his discoveries along the way, the curves and changes that mark his historical progress, and the effects these had upon society. They are important because Boorstin is a place finder and a place keeper who shows our progress as a country, society, and habitants of this large world that we all are a part – and guides us to something better in ourselves. These works are lasting works. We can all learn something from Boorstin’s achievements.

Images of book covers via Amazon.com

Renee Kimball loves books and reads widely–literary and genre fiction, autobiography and memoir, humor, psychology, philosophy,  and religion among them. She has a master’s degree in Criminal Justice and is involved in rescuing, fostering, and finding forever homes for homeless dogs. She’s working on a novel set in the southwestern United States.